Read this important review exposing the 7 Figure Months Scam Bitcoin Software.Do not let anyone fool you using a piece of junk Bitcoin software with the idea that you will become rich in 30 days. Look at what Martin Saunders of the 7 Figure Months website is doing. He is fooling people by making them believe that he discovered a loophole that has seen him make over a million dollars every month for the last one year. His fabricated bank account records actually show that this man has $12,000,341.34. Do you believe he is real? Let’s find out the damning evidence. 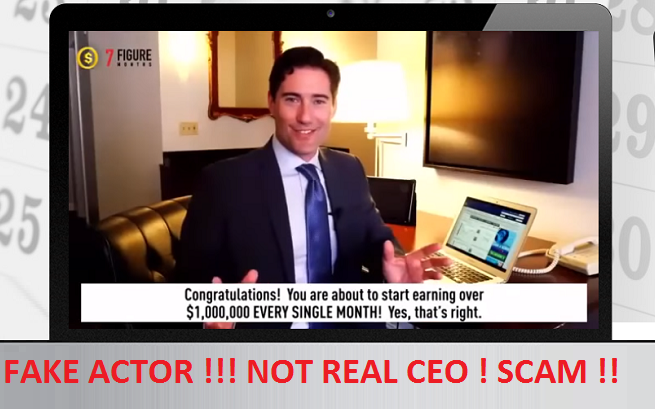 Definitely there are many reasons to believe that the 7 Figure Months Bitcoin software is a scam. We have gathered all reviews & evidences and have concluded that this is another clever trap laid for new traders who are hungry for quick riches.You should actually know that this Bitcoin software doesn’t make a dime, which is why it’s aggressively being marketed by people who don’t have a reputation.

And by the way, Martin Saunders is only accepting 20 people at any given time because he’s afraid that too many people will dilute his scam 7 Figure Months Bitcoin system. This is a claim we have verified and found to be false. There are unlimited chances each day you visit this scam website. The limited number he is talking about was only meant to create a scarcity scenario.

This is a typical case of scammers telling you that their doors are open today and that people will not get a chance to come in once it closes at the end of the day. In other words, you should claim your chance of earning a $1,000,000 every month before it’s too late.

Good thing, however, is that we all know of these tricks. Internet marketers have used these tricks since time immemorial. The 7figuremonths.com website have claimed that people will be locked out of opportunities once time runs out, yet those individuals still welcome countless sign ups months after giving the notice. They only stop when they are discovered and their website is pulled down.

No one is going to make $35,000 a day like this 7 Figure Months website claims. You are actually going to become $250 poorer when you hand over your wallet to one of their rogue brokers.Secondly, we don’t see how this Bitcoin system has been in use for the last 12 months when it was only registered on 26th June, 2016. There is no evidence that anyone was using the 7 Figure Months Bitcoin software before this time. But even after this date, there is still no evidence of anyone using this Bitcoin system to trade Bitcoin .

It is never fun to be the first to test the waters, especially when you’re investing a sum of $250. This is a totally strange trading robot that is being sold by a stranger. The only mention of this Bitcoin software takes place in reviews that seem to be unnatural – that is, all of them were paid to lie that the 7 Figure Months program is a good Bitcoin system.

If you search Google for the 7 Figure Months website or program, you will realize that the articles showing up on the first page are not expert reviews. They are written by people who don’t really understand the Bitcoin software. You instantly get the feeling that these people are endorsing something which they haven’t used.

We need you to keep off this ruthless 7 Figure Months scam because we have discovered that you will not make money using it. Secondly, there is no evidence that 21 family members of Mr. Martin are using this Bitcoin software. Thirdly, we have provided enough proof to suggest that this Bitcoin system was not founded 12 months ago, but was only created less than a month ago (as at the time of writing this review).

We don’t think people want to take Martin’s lies so lightly, and especially when they are being told that this Bitcoin software is free to use when it’s not.The reality of this matter will come to everyone at the point where they are being asked to fund their account with $250 to use a trading robot that is worth nothing.

You should know that no one is using this 7FigureMonths.com Bitcoin software, not even the family members or friends that Martin mentions. You are the only prey he hopes to pounce on, thanks to the fabricated bank accounts which he is making use of to convince people that he is not interested in small monies.

We don’t know of any kind of investment that would turn $250 into that much. Unless you stole that money, there is no way you’ll make that much of money trading Bitcoin alone.This ridiculous statement also suggests that the 7 Seven Figure Months program doesn’t make any mistake in executing trades. Again we find this scenario very unrealistic especially if you consider the fact that no human or Bitcoin software can predict market movement with 100% accuracy.

As a matter of fact, no Bitcoin software on earth is able to produce 90% accuracy when it comes to executing short-term trades such as Bitcoin .We are therefore seeing that this criminal is actually preying on the ignorance of a poor trader because he doesn’t know these things. They are not familiar with Bitcoin , but they’ve certainly heard that there is money to be made trading these financial instruments.

We realized that the testimonials that backed this Bitcoin software were not real too. Look at this woman called Michelle. She was paid by the owner of the Seven Figure Months scam to act on camera. We know this for a fact because the same woman appeared on Nesdek scam as Sarah. We don’t think anyone wants to trust someone who is not transparent or honest enough with his dealings. These are warning signs you shouldn’t ignore.