There is unquestionable proof that the Brexit Millionaire is a grand scam! Unfortunately, numerous people have already fallen victims of this fraudulent trading system. The information that follows pinpoints all the inaccuracies present on the official website of this software, as well as the downfalls that have been reflected of it recently.

The negative Brexit Millionaire reviews that have been left for it on different platforms are clearer than water. This system is not to be trusted! This Brexit Millionaire review does not hold back, so that you can be aware the sneaky things this system uses to acquire attention, but also, so that you can be better inform about the latest tactics that fake program creators are using to lure people in.

What Is the Brexit Millionaire Software Supposedly All About? 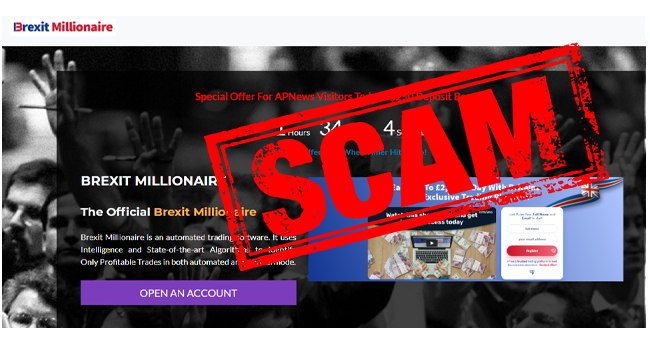 According to the official Brexit Millionaire website, it is an automated-trading program that utilizes state-of-the-art intelligence and algorithms to identify profitable trades in manual mode and automated mode. It is said to be the type of trading tool that aids people profit off bitcoin in a significant manner.

The Brexit Millionaire website goes on to mention that it is powered by AI technologies for there to be a lucrative transparent and trading environment. There is even a guarantee that states anyone can make their first million in the first year if instructions are followed as specified. All these details sound extremely enticing, but there is no proof that these are facts. Everything indicates that these are empty promises.

At the moment, there has not been an individual who has used this program and has provided a Brexit Millionaire Bitcoin App review that specifies that he or she made one million dollars with the aid of it. This will never occur. Every Brexit Millionaire review out there that is on a reliable website reflects quite the opposite. People have lost rather than gain.

Instead of elaborating what the Brexit Millionaire Crypto system is all about, the creators of it invite guests to sign-up right away. Supposedly, this is Britain’s most exclusive program, but there is also no proof of how its developers came to this conclusion. To state such powerful message, there has to be credible sources to back it up.

There is a very prominent timer on the Brexit Millionaire Apps website with a bright-red blinking invitation so that you can sign-up before the timer hits zero. This is a tactic that causes people to hurry to give this trading system the green light; therefore, they overlook a lot of red flags. Right from the beginning, visitors are being pressured to join, which is a big no-no. Developers of credible systems do not pressure anyone to join because they are secured that their systems will sell on their own and on their own time.

The website keeps inviting guests to read the Trustpilot Brexit Millionaire reviews. The reason why only Trustpilot is mentioned is because on every other platform, this trading tool has been bombarded with negative reviews. Trustpilot reviews have often been noted to be fake. It would not be shocking to find out that the developers of this scam actually paid for every positive Brexit Millionaire review or wrote these reviews all on their own on Trustpilot. Knowing the mindset of creators of fraudulent system, it is more than likely that they wrote them in order to save a penny or two.

According to the site of this scam, opening an account is an easy process. The first step is to enter some personal information on a form. Then, a redirection to the Brexit Millionaire app interface will take place. The second step entails funding your account. You will be redirected to a deposit page to add funds to the trading account. The third and final step involves actually trading by clicking on the ‘start-auto trading.’ These steps are real, but the destination that they lead to is one in which you will acquire a significant number of losses if you commit the error of trusting it.

There is nothing knew about the opening an Brexit Millionaire account process. The aforementioned steps are the same ones that you can expect to undertake when dealing with a reliable platform. Nonetheless, there are no significant details present in none of the steps. It appears that the creators of the Brexit Millionaire scam do not care to elaborate on them to a great extent, which is another tactic used by scammers so that people do not begin to question, and fall for their system within minutes.

The Brexit Millionaire scam website tries to convince guests by also mentioning that this is a tool that has the six most popular trading indicators linked to seven different time frames. This is said to provide members with access to a grand range of trading signals. Supposedly, privacy and security are imperative for its developers. Allegedly, this platform is secured by SSL and the compatible brokers are mentioned to be verified. As expected, there is no proof that this is factual.

Even though it might be tempting to give this Brexit Millionaire system a try due to the pressure tactics on its website, we urge you not to sign-up for this scam. You will end regretting it for a long time. Brexit Millionaire reviews reflect that countless people have become victims of it and have lost their funds, which they will never see again.

Is Brexit Millionaire Mentioned in This Morning UK Show?

They want to avoid people questioning if their Brexit Millionaire App is fraudulent or not. Unfortunately, this tactic often works. There are numerous individuals who believe what they read instead of first going the extra mile to investigate if that information is factual. Do not fall for it!

There has been no Brexit Millionaire Dragons-Den-related mentioning. It is a complete lie that the creators of it, who have yet to showcase their faces, have developed to convince men and women that their system is trustworthy.

Fake Mirror.co.uk Pages of Brexit Millionaire Is Used by Scammers

This is a new tactic that developers of fake trading tools are using, as well. The Mirror.co.uk site has already noticed this taking place, which is why its staff has sent a brief notice to warn people that not everything that they read is factual. You have to be very careful and verify information before believing in it.

Has Elon Musk Invested or Has He Had an Interest in Brexit Millionaire?

Elon Musk is currently among the wealthiest people in the world. This is another tactic that scammers are using is associating their platforms with Elon Musk one way or another. At the moment, Elon Musk has neither invested nor mentioned anything about the Brexit Millionaire scam. You can rest assured that if he was to talk about a platform, he would talk about his own.

Has Martin Lewis Invested or Has He Had an Interest in Brexit Millionaire?

Even though the creators of the Brexit Millionaire scam would want you to believe otherwise, there is no proof that Martin Lewis has invested or has had an interest in this system. Lewis recently requested for people to stay from scams, as he has become aware that a lot of scammers are associating his name with trading tools.

Other people who have wrongfully been associated with the Brexit Millionaire scam have been Chamath Palihapitiya, Eric Schmidt, Richard Branson, Bill gates, Peter Jones, Jeremey Clarkson, and Gordon Ramsay. There is absolutely no proof that any of these popular individuals has tried this system.

The creators of the Brexit Millionaire App have already come forward and stated that some of the aforementioned people do not endorse their platform. This only happened due to people pinpointing these inaccuracies. Of course, they want to make the Brexit Millionaire scam appear to be one of the most credible on the market, so they had to come out from time to time to cover their lies.

The Brexit Millionaire Trading Program Only Helps You To Lose!

There are some systems that are developed to help you win, but there are others that are only developed to help you lose so that their creators can win. The Brexit Millionaire software uses very good tactics to convince people that they can win. Nonetheless, with a little digging, you will note that this is not the truth. This Brexit Millionaire platform is yet another fraudulent trading tool that should be avoided.

Report similar scams to us !