Every person who opts to invest with this Bitcoin software will lose all of their deposit, and have absolutely no chance of getting those funds back. Fortunately we’ve assembled a Cash Loophole review that should help more people falling for this scam. It’s going viral at the moment so do please be fair warned!

Why The Cash Loophole Bitcoin Software Is Scam ? Review & Alert !! 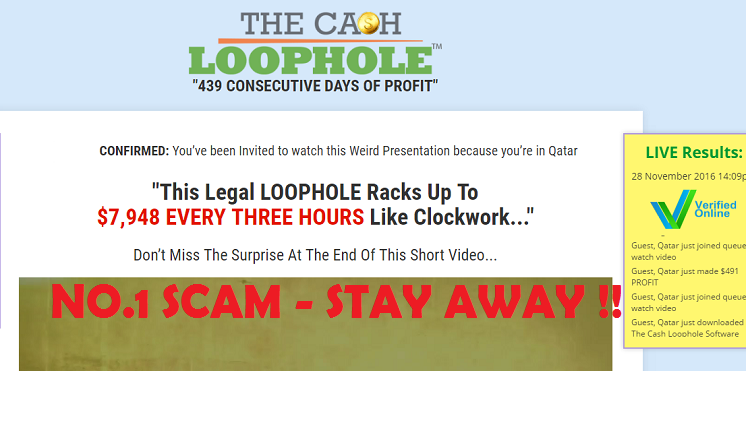 As with most Bitcoin scams it’s pretty easy to call out a fraud. In this case the Cash Loophole tries to convince budding investors that it’s conceivable to earn $20k a day via their Bitcoin software. Much as we hate to be the partypooper – don’t believe a word of it.

Anyone with a vague interest in legitimate Bitcoin trading will know right away that the Cash Loophole Review team claims are absolutely impossible. As with most scams they put a figure on projected earnings that is somehow capped. It’s not an estimate, or even a median amount of what a trader should be earning. Instead it’s a blanket fixed amount – enough to appeal to the easily led, but by no means a realistic figure.

According to Richard Sellars, those who buy into the Cash Loophole scam can expect to earn a staggeringly high amount of money per day. If we believed him, then the Cash Loophole Bitcoin software is without question the most powerful trading tool on the planet. Unfortunately – it isn’t!

When it comes to dependable Bitcoin signals Bitcoin software, the very best legit operators never speculate on potential earnings. This is because it’s impossible to do so – the market works in weird and unpredictable ways. Even the best will endure bad days at the office, something decent Bitcoin systems make very clear from the outset. To put it bluntly, the Cash Loophole promise of guaranteed income is blatantly nonsense.

Mr.Sellars explains that apparently the Cash Loophole’s review Bitcoin system has been carefully designed by absolute experts in their field. Mathematicians, brokers – you name it, chances are that they’ve allegedly been involved in designing this Bitcoin system. This is interesting because at no point during the video presentation is the viewer given any details as to who these people are. Besides an elusive reference to ‘Martin’ there’s no names provided, let alone any indication of actual expertise.

Obviously this is because the Cash Loophole platform is a complete scam. After a little digging, there isn’t even any proof that Richard Sellars actually exists! Someone claiming to be a many times millionaire with a Wall street background should be pretty easy to trace, right? Interestingly in this case – as with many other scams – there’s not an inch of proof that Sellars exists. The reality is that the guy playing the Sellars role is nothing more than a day-hire actor, who is happy to read a script on behalf of the bosses behind the Cash Loophole website.

As for the presentation itself, it’s a template for fraudulent Bitcoin scams. The viewer is presented with masses of scenes cut and pasted to suggest that they’ll actually have the chance of living in a massive mansion, driving sports cars, all thanks to the Cash Loophole reviews. Much as we’d all like that – it’s utterly bogus.

We’re supposed to believe that the Cash Loophole Bitcoin software is infallible, completely automated and literally a way to make free money. The truth is that this program is proven to be nothing but a scammer’s paradise, there to merely milk client’s funds dry. 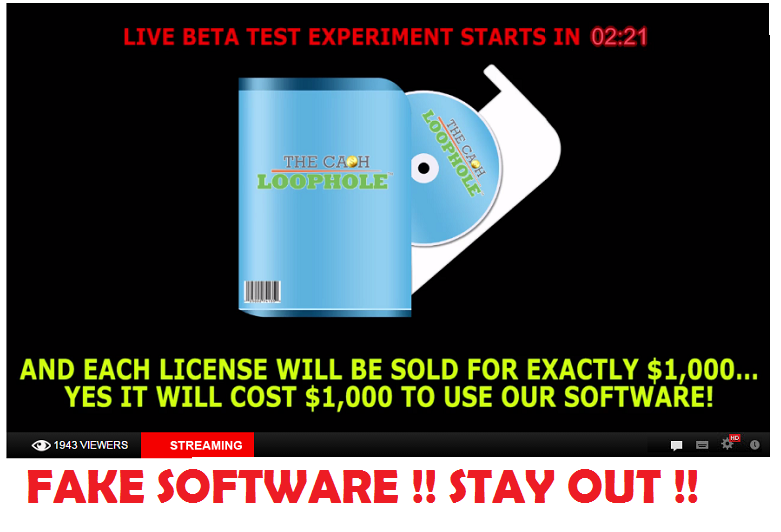 Countless thousands of people have fallen victim to scams such as the Cash Loophole Bitcoin system. Many expect that there’s a degree of accountability with their investment, that they may have a right to complain and even prosecute those who waste their deposits. Unfortunately the opposite is the case.

At no stage anywhere on the Cash Loophole Bitcoin system does it explain – or even try to – how and where it is registered. This means that investing with them, or any other scam for that matter, is basically trusting to pot luck. Sure they’ll have plenty of disclaimers tucked away, but that isn’t worth anything, because they aren’t remotely accountable.

The Cash Loophole program works by supplying rogue, untraceable ‘traders’ with their client’s details. In exchange they receive a decent finder fee – but at this stage a client’s relationship with said trader is basically over. Those posing as reputable traders are in fact crooks who will leech every single penny from an investor’s balance. They don’t provide any contact or geographic details, and will absolutely never respond to queries or complaints.

Sellars claims that his operation has already made over a hundred millionaires. This is odd because the actual Cash Loophole website was only registered early this year. Even given the astronomical earnings claimed, it’s fundamentally impossible to become so rich in the given time period.

Ask the simple question. Why would Sellars claim to have possession of world beating Bitcoin trading software, just to offer it out for next to nothing? After all, world leading banks would be falling over themselves, offering many millions in exchange for the access rights – if it were genuine.

Clearly because the Cash Loophole Bitcoin software is entirely bogus. There’s not a shred of evidence provided that it works. The scammers couldn’t even be bothered to offer anything besides a badly Photo-shopped screen shot or two to make it even appear legitimate. Even in the world of Bitcoin scamming, Cash Loophole App really is a lazy affair.

It’s always annoying to see flagrant scams such as the Cash Loophole Autotrader going viral. It means that more and more people are going to get exposed to what amounts to a criminal enterprise. Most will steer clear, but a few will be tempted – and without question they’ll lose everything. Setting up a scam is pretty easy and very cost effective, after all it only takes a few to turn a rather healthy profit. So take this as warning. The Cash Loophole review Bitcoin system is an absolute scam and not worthy of a second from anyone’s day!