Fast Profits Is A Scam ; Accurate Review of APP Exposed !

The Fast Profits bitcoin app is nothing more than a scam – the evidence is already in. Despite all the promises that this bitcoin software can make you stinking rich, reviewers have already given it the thumbs down. So don’t even think about signing up with the Fast profit app or the profits you may make so quickly will just as quickly turn into losses. Play it smart, save your money and avoid, avoid, avoid!

What Is the Fast Profits Bitcoin System?

The Fast Profits Bitcoin system is yet another bitcoin trading platform which has been recently released. The voice actor, AKA the founder of the app swears that the bitcoin software has made 25 million dollars for him in the short span of two years. This is just the first of a series of outrageous figures which the voice over on the video for the FastProfits.co spins out to listeners. Some other astounding amounts include the statement that you can gain a profit of $10K to $50K per day if you begin your Fast Profits journey with a deposit of $5K, or that you can also make a profit of $9 million per year starting out with the same amount. These numbers should alert anyone to the probability that the Fast Profits bitcoin software is sheer scam from beginning to end.

One reviewer has backed up the statement that the Fast Profits Bitcoin system is yet another bitcoin scam, by saying that even the top hedge fund managers who have billions of dollars at their disposal, can only make a 20%-30% profit for their clients. So why should the Fast Profits bitcoin software be any different?

The voice over on the video continues to make many empty promises such as “I am going to make you stinking rich.” and “It’s your turn to live The Dream.” He promises that he will firmly stand by his word and that if you are listening to the video you have been chosen by Luck to be able to hear about the Fast Profits app – the Luck being a random mail-out sent by the Bitcoin system’s founder and his business partners.

The developer of the Fast Profits bitcoin software asks only one favor of the people who become members: He asks that the members do not share the app with anyone at all. This is supposedly because the Fast Profits Bitcoin system cannot work if the number of members reaches the full capacity. This is a strange objection, but if members are ever caught sharing or in any way “misusing” the Signals Application, they will be denied access to it immediately. It simply begs the question to wonder if a fresh pair eyes may spot the scamming nature of the Fast Profits bitcoin software more quickly than a member who is involved in the quest for making a profit from them.

What Else Proves the Fast Profit Bitcoin System is a Scam? 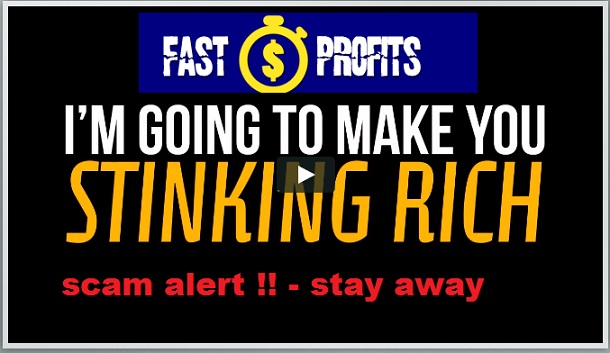 One reason why the so-called founder of the Fast Profits bitcoin software has not revealed his name or his face is that there are too many bitcoin offers released on ClickSure each year for the reviewers to keep track of them all. The marketers, make no mistake because that is what they are, simply create a new domain name and a matching video and they are in business again, selling another bitcoin trading dream to unwary traders. The vague similarity of the videos gives them away every time. These scammers are paid a commission by brokers as they fool people into becoming a member of a trading platform that may be served by unregulated brokers and which will never show a consistent profit to its members.

The anonymous voice over on the website video says that all he wants in return for the free app that is given to members, is a personal video which shows how much money a new member has made in the first month of trading on the Fast Profits bitcoin software. Perhaps this is evidence for the brokers that the Fast Profits site has really attracted some members, despite the laughable hype that forms the content of much of the promo video. It’s such a shame that these men deal in lies and falsehoods, because there are genuine options trading platforms on the internet, and these guys are really the small number of bad apples that spoil the rest of the barrel.

A little bit of research reveals that a man named Tom Davis is the CEO and founder of the Fast Profits trading platform. He states that the ITM rate for the bitcoin software is 99.8%. This is just another falsified figure which must alert almost everyone who has had some dealings in options trading because it’s just is not possible for trading software to be correct or in the money so often.

If these inaccurate figures have not alerted you to the possibility that the Fast Profits app is a scam, then consider whether sailing in yacht, owning a home with a swimming pool in the yard and rubbing shoulders with the very rich is really your Dream. If it is, then the best advice you will ever get is that the Fast Profits bitcoin software is a huge scam and trading there will probably result in your becoming what is sometimes called Nouveau Poor.

Verdict – Stay away from this asap !

As another reviewer stated, there are about 50 new options trading sites coming onto the internet every year. To be sure that you are going to trade on a legitimate platform, always check the Blacklists signals page at bestbinaryoptionssignal.com to make sure that the platform you’ve signed up on is not there.  we are fighting against scammers and review the best, most genuine trading sites.

It’s good to read an honest review; as one of them bluntly puts it “99 times out of a 100 these Bitcoin systems, such as the Fast Profits Bitcoin system, are rubbish and they are going to result in you losing money.” That’s pretty straightforward and a good indication that many of the recent trading platforms, just like the Fast bitcoin app are scammers whom it is best to stay right away from.