If you are looking for the question Is Million Dollar Months a Scam Bitcoin Software.Our close investigation into the unbelievable claims made about this Bitcoin software offer, we can reveal in this review all the reasons why Million Dollar Months is a scam.We would not want anyone to lose money by funding a trading account for this Bitcoin software offer and relying on an automated Bitcoin system that is not to be trusted. In this MillionDollarMonths.com review we set out all the evidence which points to a scam trading Bitcoin system that clearly should be avoided.

The Million Dollar Months Bitcoin software is said to be the first push-button trading Bitcoin system that is guaranteed to be 100% accurate for trading in Bitcoin. It has been developed by Brad Davis. He has a PhD in Finance and Statistics and wants to offer the Million Dollar Months App for free, to just a few “randomly selected” people, before putting the price up to $9997!.Brad Davis says that he and his team have made more than $38 Million in profits from the signals App, over three years of research and development. During testing, he says, it generated more than a Million dollars every month. The Bitcoin software  and mobile app are designed for automated Bitcoin trades that are claimed to be 100% accurate, 100% of the time.

How is the Million Dollar Months Bitcoin Software Supposed to Work?

To activate your copy, you have to fill out your details on the Million Dollar Months website and enter the VIP members’ area inside. From that page you have to grab one of the remaining spots by opening a trading account and funding it for your automated trades in Bitcoin. The Bitcoin software will do everything for you and the MillionDollarMonths.com signals are supposed to generate a huge dollars in just 30 days.

Why Million Dollar Months Is A Scam ? Real Proof Revealed ! 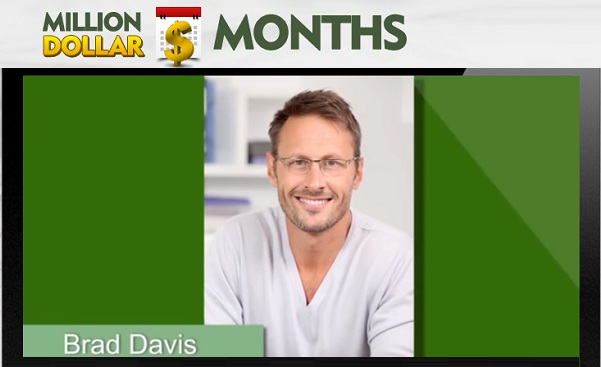 In researching for this review we have found a great many warning signs and we have gathered together all the evidence which shows that the Million Dollar Months method scam has been set up to mislead people into thinking they will become wealthy by using the automated trading Bitcoin system.We present all the evidence in this section of our Million Dollar Months Bitcoin system review to show that deceptive tactics are being used to promote it and the information provided does not prove anything. There is no guarantee against losing money with this scam.

First we tried to find out more about Brad Davis, Creator and CEO of Million Dollar Months method. There are many people of that name, and some are executives, but there is no trace of any multimillionaire trader who has set up his own business to develop a bitcoin trading app.The only information provided about the business on the Million Dollar Months website shows it to be founded by the CEO Brad, with a director who is only named as Matthew. John is the Bitcoin software engineer, Eva does customer support and Kate does is the market analyst. These names are accompanied by what look like stock photos taken from an image site.

Why Million Dollar Months Bitcoin System is a Fake Company ?

If this was a legitimate company, and not a scam, the full names would be given in the MillionDollarMonths.com website. Just giving the first names and showing profile photo taken from a stock image site is a clear indication that these are not real people and there is no such Million Dollar Month company.The Twitter and Facebook feeds on the website never change and only show first names. True tweets and Facebook comments always feature a username, not a first name, so these are not genuine feeds.The video focuses on the idea that accessing the Million Dollar Months App is like getting hold of a winning lottery ticket. There is no information about how the trading signals are calculated and plenty about living a luxury lifestyle and what it is like to make millions. After showing some stock images of a luxury house and a fast car, the narrator says that these belong to him.

The Three Million Dollar Months Bitcoin system video testimonials use paid actors who hire themselves out for this type of work. If these nameless people really had made a million dollars in thirty days, they have obviously not spent any of it on new clothes or hairstyles. In the live trading video, the unnamed female keeps saying “This is unbelievable!” and she ends up after 30 days with more than million in her account. In reality, why would anyone want to leave such a big amount in a broker account without at least withdrawing some of it!

Tactics that are used to get people to join the Million Dollar Months bot put on the pressure by making it appear there are only 10 copies left when you arrive at the website and this number keeps reducing when you stay on the homepage. Each time we accessed the website for the purposes of this review, we saw the same number of available copies. The countdown clock showing how long is left before the offer closes also starts up every time. It is implied that only a select few people will be given access to the free MillionDollarMonths.com Bitcoin software. Brad Davis says he only wants 28 people to be allowed to use it for free. This is just to urge people to sign up instantly and open a trading account. The only guarantee you get with the Million Dollar Months scam is an empty promise that there is nothing to lose. The fact is that you have to place $250 or more in a new trading account, and there is no way to get a refund if you lose all of it.

Our investigation into Million Dollar Months Method for this review proves it to be a real scam. We must issue a strong warning at the conclusion of our review that this free Bitcoin software offer for using a Bitcoin trading system is not to be trusted. There is absolutely no real guarantee of 100% success and there is some risk involved in funding an account to use with the Million Dollar Months App. Post your Comments below

Melwin Philip is a FinTech specialist, a market analyst, and an investor. His investment strategy entails performing a valuation assessment and conducting technical analysis on financial and technology firms. He's passionate about stocks, forex, blockchain, and digital assets. He keeps a close eye on industry trends and provides insight into beginner-friendly platforms.