Read my conclusive & unbiased Money Mentors Club Review. This MM Club Aka Modern Money Club is a Scam Bitcoin system being launched recently.When you hear the Bitcoin software Money Mentors Club being mentioned, you automatically begin hearing those bells telling you that this is a scam. You see, A-class scam bugs love to use the word ‘’club’’ in this industry of Bitcoin. They imagine that this is such a powerful word that is likely to convince anticipating traders to register. Money Mentors Club Bitcoin software now flourishes on the fact that naive traders are willing to search for these ‘’opportunities’’ every day. But now our investigations reveal the nasty side of this deal. You’re more than likely to lose your money in the so-called MM Club Bitcoin software.

It was brought to our attention that this Bitcoin software is also known as Modern Money Club. This is a cover-up in fact. It’s meant to bring in the confusion when you’re too focused on the Money Mentors Club scam. By doing so, they are hopping you will never discover the fact that you’re being sold the same thing that has had bad reputation since day one. 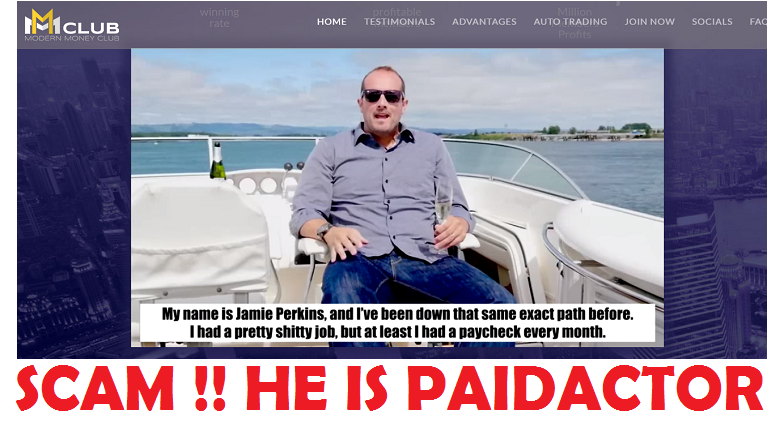 Unfortunately yes, this is a big scam that is going to prey on the unsuspecting victims looking for ‘’good times’’ trading opportunities.You must realize from this Money Mentors Club review that things don’t work that way in the real world. You’re likely to screw your wallet of your hard-earned $250, just because you trusted some random duo by the name Jamie Perkins and Peter Haines.

You see, their story is similar to that which is usually told by scams. So it doesn’t come by surprise when they say that Jamie Perkins is a seasoned bitcoin trader while Mr. Haines being a professor in Business & Economics.

These people claim to be family friends who had a common goal to help those suffering in the Bitcoin industry. This help was supposed to come in form of a good trading robot which channels in profits in a more consistent manner. But did they succeed? Why were they insisting on saving traders who struggle when that situation did not affect them in any way?

We don’t know who Jamie Perkins or Mr. Haines really are

According to their made up melange of stories & fake positive Money Mentors Club reviews, visitors are fooled that Jamie tried Bitcoin using automated solutions and made $450 that month. Since he was disappointed and was not willing to return to his regular 9-5 job, he decided to team up with Professor Haines who willingly shared his extensive financial knowledge with him. Because Haines had some background knowledge on the economy, they studied trends, even going as far as implementing strategies used by Warren Buffet.

The Real Truth about the MM Club Technical Knowledge !!

In as much as they are dragging Warren Buffet or Wall Street’s name into this scam, these two individuals should know that Money Mentors Club Bitcoin system is not taking them anywhere.

We don’t have proof that Money Mentors Club Bitcoin system is based on any credible financial theory or method of operation. Of course we cannot rely on the mere mention of this Bitcoin software being able to analyze and process data from global events.

Also, we cannot rely on the mere mention that this Bitcoin software will take assets randomly and calculate their odds of success in going up or down. Because of this, it is very risky to rely on the MM Club. Even manual traders would be fooled by these signals because they are never consistent with other technical indicators.

The www.mmclub.co website makes heavy claims which cannot be justified with evidence. They claim that Money Mentors Club program guarantees a success rate of 88%. But their fabricated testimonials, fake positive reviews mentions 98% win rate and above. Again, this inconsistency is very suspicious, and should ring bells in your mind.

There is also claim that this Bitcoin software is being used by over 2000 traders who have since generated $18.5 million in pure profits since they started using the Money Mentors Club App. Again, we want to assure our readers that this is just pure blubbering. There is no evidence or anything to back the claims mentioned therein.

But if you think the fake badges & twitter reviews published on the footer of the website are genuine, then you must know that these are works of scam bugs. Those badges are not real. Just in case you want to test what we’re talking about, click any one of them. If that badge doesn’t redirect you to the alleged website, then know that it’s fake. Plain and simple!

The Money Mentors Club Bitcoin system is marketed as the only automated program that also has an opportunity for providing free Bitcoin education.But then, when you read what their FAQ is saying, you will realize that making profits isn’t guaranteed with this App. So what’s the point of trading using this Bitcoin software anyway?

We know that the mention of being educated to avoid making mistakes is a very appealing marketing tag line. Most people don’t want to flow with automated Bitcoin software on a live account if they still don’t have confidence.

But how will we trust that these resources are provided if they have failed other tests as well? Look, these guys said that they were offering 24/7 customer support via email and chat. But the Money Mentors Club website doesn’t have chat functionality anywhere. Their email support is also screwed up. The website doesn’t have a ‘’Contact us’’ page, which makes us doubt if support is really available.

The MM club website is marketed with lots of promises yet there is not even a single feedback from the so-called 2000 members. Why do you think this is happening? It must be very suspicious indeed, which is why we don’t encourage anyone to register with Modern Money Club, unless they want to lose their money.