Read this important review “Is Push Money App a Scam Bitcoin Software or not”to stop losing your hard-earned Money.The agenda of this PushMoneyApp.com review is straight-forward: we never fail to flag down all the fakes in the market. The fact remains that Push Money App Bitcoin system is just another neat scam tacked in place to shoot your adrenaline and make you surrender all your wallet’s content in the hope that you will buy a private jet. Such kind of a Bitcoin software follows into the footstep of the same pattern that horrible business practices you and me are aware of have followed lately.

If you’re looking for a horrible Bitcoin robot’s that leverages on the up-sell so you can lose money and keep the broker smiling, think the name Push Money App method. If you were already falling for this dangerous scam, we’re regretful, plus we’re sounding a word of caution to you and anyone who might want to invest in this Bitcoin system.

Going underground to burst some of the most dangerous frauds in the Bitcoin trading industry takes some dedication.In this Push Money App review we have done all the hard work for you, we have finally gathered some concrete evidence to show that indeed Dennis Moreland & Mike Callahan (who are allegedly the owners of this PushMoneyApp Bitcoin software) are mere actors, probably hired for peanuts on the promise of receiving a decent cut once you desperately rush your $1,000 deposit. 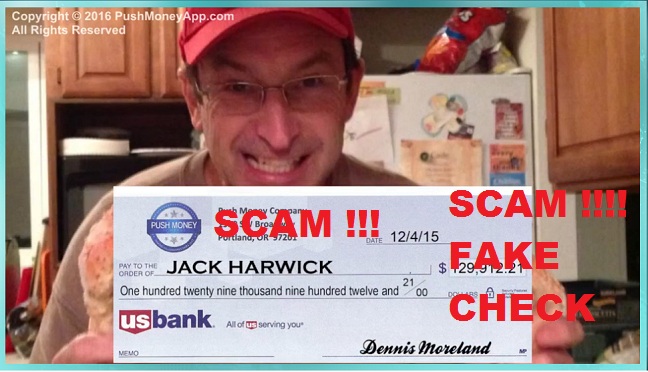 The promise of being matched with a clean $10,000 bonus when you give your name and email address is absolutely horrible. We have mastered the art of sniffing liars miles away. Now you can rest assured that this review speaks nothing other than the gospel truth.It is alleged that Push Money App Bitcoin software is a company with real members who have earned fat checks with this Bitcoin software.

A fake check by the name Jack Harwick dates back to 12/04/2015. That check contains some hefty amounts earned, thanks to the ”accuracy level” of signals.Nevertheless, don’t be surprised that PushMoneyApp.com website didn’t even exist in the whole of 2015. They only registered the website last month — that’s in January 2016. So, where did this actor earn that check from? And why was it labeled with Push Money App company’s name? .If you’re asking those questions, then we can assume the simple fact that such checks are scam Photoshop works .

The address 1500 SW Broadway, Portland is a weird address when associated with Push Money App Software. Despite all the hard work we committed towards searching the real location and identity of this company, we were not able to find answers.This is something you can test on your own. Just type the full address of the Push Money App company on Google.

Google will probably return a few results, all of which are not even related to Push Money App system.Fraudsters hide behind some disclaimers and risk warnings to make them appear genuine and mindful. Take note that slapping these statements somewhere on the footer of a website is a matter of copy-pasting from one website to the destination website. Fraudsters don’t waste time writing a customize version of these pages.It is highly likely that Push Money App program has stolen loads of dollars from unsuspecting traders out there. The $10,000 match up bonus will never arrive in your pocket, and the trick is simple.

The PushMoneyApp.com Bonus Conditions are Risky !

That kind of bonus works to the advantage of the criminal broker by locking all your deposit into their account. This way with Push Money App system will be required to generate an extremely large number of trades before recovering your initial deposit (assuming you will make it). Take note that this may take forever — even worse still, you will most likely lose more than you’ve already lost trying to recover your initial deposit. So don’t bank on the $10,000 match up bonus myth. It’s going to damage you severely.

We have tried searching the profiles of these two guys on LinkedIn, Facebook, Google, you name it. But as we have always suspected from day one, no pictures coming forth are matching any of the faces we are seeing on the official Push Money App signals website.

The only reviews that are endorsing the works of these two actors are the usual fake reviews that litter the first page of Google. They populate the word ”scam” too many times on endorsement reviews, something that you will realize as soon as you begin reading the first paragraph. That means they are actually hoping to convert the minds of readers who might initially be hesitant of the scam Bitcoin systems. Those kinds of positive Push Money App reviews clearly don’t have your interest at heart.

Assuming you were new in the world of Bitcoin trading and you came across that statement, chances are that you’d fall into that trap.If this Push Money Bitcoin software functions on invitation only basis, then who are the people being rejected? Come on, you’re walking directly into a trap — actually joining everyone else who has signed up, thinking they are the luckiest lot on planet earth when they are not.

Actually, you’re not being invited to join. You’re being solicited to join through all means, even if it will mean enticing you with fake promises. That’s what Push Money App Bitcoin Software is all about.If you don’t believe this, just carry out basic review and research about this method.

If you have the right tools to unearth the truth, you will probably come to this conclusion — that Push Money App system is a dangerous fraud that will continue to ”swallow” money from unsuspecting traders.Always check our scam Bitcoin signals page before you sign up with any Bitcoin systems .Share your Feedback about this fake Push Money App site below in the comments section.