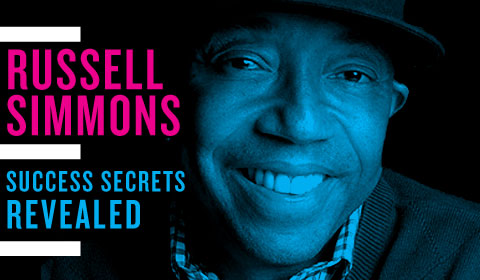 Russell Simmons, the music, fashion and media mogul has been an inspiration for young urban entrepreneurs since the late ’80′s. And-anyone who follows his Twitter stream knows that the admired entrepreneur is not stingy when it comes to sharing his secrets to success.

In one recent tweet, he explains, “Good givers make others better, by this process others look to them for leadership.” That quote embodies Russell Simmons’ consistent focus on giving, inspiring, and leading- actions that he demonstrates regularly through his works and words.

We know you’re already familiar with Russell Simmons’ work- from Def Jam, to Phat Farm and everything else in between. But, take a moment to look closely at his words, to understand the mindset of one of the most accomplished urban entrepreneurs of our time.

1. Surround Yourself With Talented People.

“I’ve been blessed to find people who are smarter than I am, and they help me to execute the vision I have.”

2.Don’t Keep Important Lessons To Yourself.

If you learn late, you pass it on to people so they can learn early. It’s a step process.”

“My experiences have been, from the very beginning, cultural and creative. And my business has been a way of exposing the culture, exposing the artists so that the world could hear and see them.”

4. Find Your Mission In Life.

“I want to fight poverty and ignorance and give opportunity to those people who are locked out.”

“You can be anything you want to be, and you can start today, instead of waiting for some opportunity.”

6. Sometimes You Have To Start Alone.

“In many instances, I built companies where I was the only one who believed. And then, someone else would come along and because they see it start to happen they would find a part that they could play a role, and they would help me build my company.”

7. The Security You Seek Is Inside You.

“People are fearful. They think they have to accomplish something immediately and that they’re going to be secure somehow. But, they have to know that their security is already in them, and they have to operate from that kind of abundance that is already inside them.”

Want more tips… In this video Russell Simmons explains the art of entrepreneurship to give you even more insight on how to create your own successful business.

He also has a new television show, Running Russell Simmons, premiering on the Oxygen channel on November 2. Since “Uncle Rush” is known for dropping words of wisdom every chance he gets, the show is sure to spotlight other business lessons that aspiring urban entrepreneurs can learn from.

Tune in. Learn from one of the greats. And build your own business empire.