Read this Important review ; The Social Tech Trader software is Scam. This fake system claims to make you over $6,440 a week all from the comfort of your home. It claims a success rate of 90%, working on auto-pilot or manually if you like. The Social Tech Trader system also promises to change your life from the moment you begin using it. However, you should know that all this is scam. It’s a fraud that is so expensive to get involved in, and as you’ll see in this review of truth.

There is concrete evidence to believe that Social Tech Trader App is just another scam masquerading like genuine Bitcoin App.Therefore, let’s begin by discussing the fundamental aspects of this Bitcoin software that makes us believe you’ll be getting a raw deal when you sign up to start using it.

The owner of this Social Tech Trader scam claims that traders will always make you $920 each day with a success rate of 90%. Even though this figure can be achieved on a daily basis (with the correct Bitcoin software), it’s just not possible with Socialtechtrader.co system. So clearly by committing your money into this,you will most likely lose it. 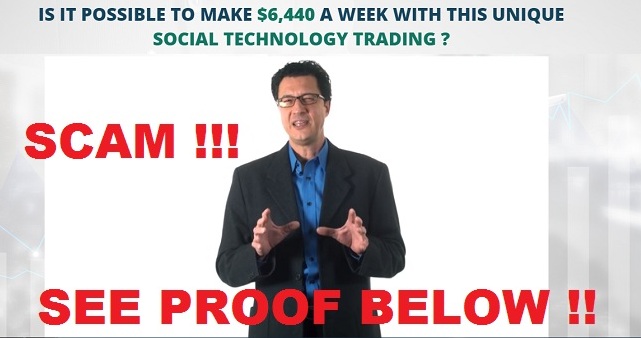 We have been introduced to a guy called Albert with no other information concerning his other name. He claims to have worked at JP Morgan, and that through his knowledge, he was able to create Social Tech Trader Software.We do not know whether or not this is true. For one, nearly every Bitcoin signals Application owner out there claims they’ve worked at big financial institutions like JP Morgan, Wall Street and the rest. Those are typical claims we can’t buy into, unless Albert and his team has proof that indeed what has been stated on that demo video is correct.

Secondly, he claims Social Tech Trader method is able to trade and achieve success on Arbitrage Strategy. We cannot believe this lie because no broker out there will ever allow a trader to trade Bitcoin using Arbitrage Strategy. It’s not accepted, meaning you will never profit from this strategy whether you use Autotrading or manual trading methods. Do not trust it when a scam method claims that its users can legitimately trade on arbitrage.

We cannot afford to believe that Social Tech Trader system is a genuine Bitcoin software because Albert and his team have failed the first few test of credibility. And it comes by no surprise that the testimonials they’ve slapped on the Socialtechtrader.co website is also fake.For one, these testimonials can be found across dozens of other scam sites on the internet. We have actually spotted this woman called Alberta Fox in a few scam sites out there. It doesn’t make sense sharing testimonials across independent sites. In fact, if this Autotrader was so successful like they claim, they would have easily asked its users to write down their own trading experience with Social Tech Trader program.

Owners of Social Tech Trader Software claim that this Autotrader was endorsed by Fox Business as the most advanced profit-making Bitcoin system out there. However, this claim is false because Fox Business has never endorsed any program like this one. If you like,you can contact Fox Business directly on their website and they will tell you that indeed they’ve never heard about such a money-making site’s.

So, where does this leave us in this review? Probably we can rest our case by warning everyone not to get involved with the fraud.Unless you are a newbie in trading Bitcoin, chances are that you shall spot a lot of disparity in the way this Socialtech trader is being presented to the world.The first thing to mention is that dates don’t make chronological sense, and this should immediately tell us how terrible a joke this is.

There are a few things we want to point out in the demo video. Once you go through that checklist, you will see that Social Tech Trader system is after all, a scam. Here’s your list:

From the points above, we can clearly see that the demo video is fake and everything else in that clip is made up. Also, if you happen to land your eyes on the news stream section, you can immediately see how things keep jumping with dates that don’t make sense.

So can you still rely on Social Tech Trader App ?Of course not. Do not let any review on the internet mislead you into believing something good will come out of this Bitcoin software. Don’t believe it when they portray how members win with Social Tech Trader signals every time they place trades. If this program was truly 90% accurate, we could have witnessed other live traders losing occasionally. Nevertheless, if they are trying to disapprove us, then where is the 10% loss that this Bitcoin software makes? We cannot trust it just because Albert and his team slapped some 12680 wins and 394 losses on their website without seeing any proof.

In as much as some reviews will try proving that this Social Tech trader software is not a fraud, the truth has been laid out there for everyone to see. Ignoring those facts could see you losing money because this fraud works like any other fraud on the internet. The people who sell it get paid for every deposit they net.Their main goal is to use fake positive reviews to convince you into making your first deposit with them. That is how they earn a living at your own expense. So if you fall into this trap, you will no doubt regret it.There is nothing like free money in the real world. Whoever shall promise you loads of cash within a short period of time will be clearly taking you for a fool. see our scam Bitcoin software’s page before you sign up with any new App’s.With the incredible number of fake positive reviews out there, it is easy to fall for this nonsense. Good thing, we have stated that true facts that Social Tech Trader system is a scam to avoid.Share your feedback’s below.

Hi, I'm James Forex Trader,This is my blog about Bitcoin Services Reviews and Exposing the frauds in the bitcoins industry.