If you have the question: “Is The Amissio Formula a Scam Bitcoin software ?”.Our unbiased review reveals the true facts about the Amissio Formula Trading Robot.We give you full details of all the evidence from our review investigations and we tell you why trading with this robot is unreliable and extremely risky.

The Amissio Formula  system is said to be the only no loss Bitcoin trading software that has ever been made available anywhere. It has been in development since the 2008 banking crisis when, according to the website, a senior trading supervisor from one of the top banks joined forces with four of the bank’s best traders to develop the Amissio Formula system bot.

The first 50 people who apply to join the 2016 group of beta testers will be given free access to the automated trading robot. The Amissio Formula providers has allegedly made a millionaire of every beta tester from a group which started trading in 2014. It is said that each member of this group of testers generated between $50,000 and $200,000 per week in profits.

What Exactly Is The Amissio Formula Bitcoin Software?

Craig Phillips is the founder of Amissio Holdings and he claims that his Bitcoin trading software has not made a single loss in the past two years. In the Amissio Formula video he says that the robot has a win rate of up to 90%, so either one or both of these statements cannot be true.There is no real information given by Craig Phillips about the analysis behind his Bitcoin system. He explains that The Amissio Formula signals are generated by following market trends and with some sort of method that can guarantee up to $4,000 per day from trades in Bitcoin. There is nothing to back up this guarantee and no explanation is given about how software with a 90% success rate could possibly have produced no trading losses! 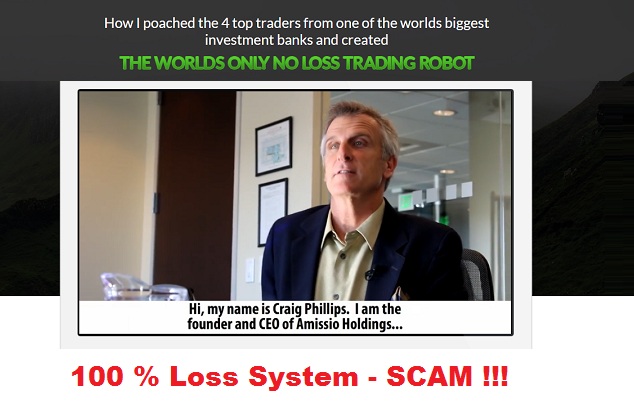 The Amissio Formula Bitcoin Software allows 100% hands free automated trading, with no human involvement in generating the trading signals. It operates a three-step Bitcoin system that allows Bitcoin trades to be made 24 hours a day and 7 days a week.When you sign up for the Amissio Formula App and deposit at least $250 in a new trading account, you will get 100% free access to the trading bot. You also get a detailed user guide, one-on-one coaching and VIP private access to a Bitcoin broker.You only have the word of the Amissio Formula website that the recommended broker will provide you with some sort of special VIP private access. Anyone who wants to start trading Bitcoin requires access to a broker and you will have to trust that your money is safe with a broker who has been selected for auto trading with Amissio Formula Bitcoin software.

Solid Proof That Amissio Formula Is A Scam!

Everything about this automated trading program offer appears to be false, fake or misleading. Our investigations for this Amissioformula.com review have revealed many signs that the Amissio Formula scam is an attempt to deceive people into thinking they cannot lose.There is nothing reliable or trusted about the fake website, the trading signals or the guaranteed daily profits. Our unbiased Amissio Formula review exposes all the lies and deceit. We want you to know that it is not possible to make the “guaranteed” amounts of profit from auto trading with this Bitcoin software. Anyone who tries it will be risking financial loss.In the Amissio Formula video there is a new trading account showing profits of $6750 being generated within a few hours, from an initial deposit of $250. This is obviously a fake trading account. It is just a demo and is not a true representation of what happens in real Bitcoin trades. Those profits are simply not possible when you start with an initial deposit of $250 in your broker account.

Craig Phillips and his company, Amissio Holdings, do not actually exist. Our research for this review found that the company has not been registered in the United States and there is no banking expert called Craig Phillips who set up his own business in 2008. He does not give the name of the bank he previously worked for, so there is no way to verify the story he tells about the people involved in the development of this App.If a group of beta testers have become millionaires, by auto trading with Amissio Formula method since 2014, none of them has ever posted a review online or endorsed it. Most of the people who have posted an Amissio Formula review online are calling it a scam.

If Amissio Formula Bitcoin system requires another 50 beta testers to use the robot for free, this means that the App must still be in development after two years of testing. If it was really guaranteed not to lose any Bitcoin trades, it would be sold at an extremely high price or given away without the pretence of inviting you to become a beta tester for the product. The only reason why this scam is asking for a limited number of beta testers is to make it look like a genuine restricted offer.The person calling himself Craig Phillips in the video clearly says that his trading system has a win rate up to 90% success. Note that he does not say 90%, but “up to” 90%. This could mean anything from 1% upwards! Even at 90%, there would be one loss for every nine winning trades, so how can he claim that this Bitcoin software has never had a single losing trade in the past two years! It simply is not possible for that to be true.

The Amissio Formula scam is inviting 50 people to be beta testers for automated robot, which is supposed to have been tested already and proved to be highly profitable. As you can tell from this review, there is no truth in the statement that Amissio Formula Bitcoin system is “no loss” Bitcoin software and our investigation into all the false promises exposes it as a scam.

Dan James Clarke is a Marketing professional with prior experience assisting businesses with brand promotion via the web and social media. He is the founder of Personal Branding MAG, a site focused on internet marketing and online branding. His work has appeared in a variety of reputable media outlets, including Entrepreneur, and Business Insider. He specializes in branding, Fintech, and internet marketing topics.