In this detailed review we uncover the Golden Paradigm System as Scam.It posses as a genuine Bitcoin software, although it’s created by a faceless Nathan Weiss who is very careful to scam traders of their money and remain undetectable.The Golden Paradigm system has everything you will ever find in the standard scam toolbox. The typical features of a scam website and offers exist here as well. We’re talking of the usual bogus ”spots left” counter, fake countdown timers, and trust badges.

These badges are not clickable, and therefore not real. In fact, we just discovered that the website of the Golden Paradigm program is pretty the same as that of other scams, and has nothing new to offer other than the regular outrageous claims of making over $900 per hour. In fact, the Golden Paradigm Team has an extra mile to state that you will be earning a salary of $978.63 in every hour that you trade. But that statement displays the highest level of ignorance and insult as far as trading Bitcoin is concerned.

The Golden Paradigm Review ; Why It’s A Scam ? 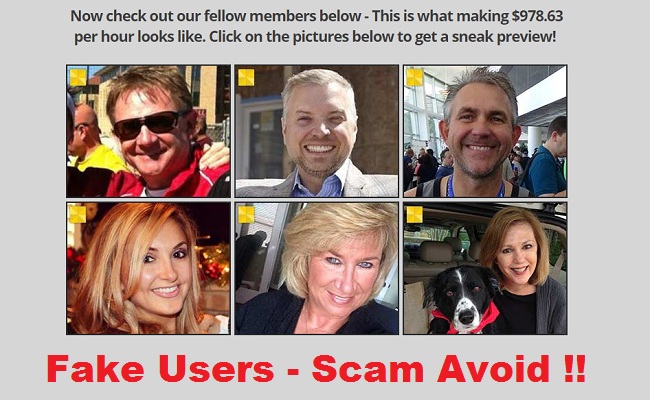 If you thought something good was going to come out from this Bitcoin software, we’re sorry to announce that you should start thinking otherwise. The only way not to regret using Golden Paradigm App is by not investing your hard-earned $250 or more into it. That way, you won’t have a reason to cry foul.The Golden Paradigm website has annoying browser pop ups to force visitors to stay on the page until they can sign up. In the real world, no one forces you to earn over $900 per hour, so these browser pop ups are just adding to the ridiculous nature of this scam .

The Golden Paradigm website has fake scarcity counter, which is typical of all scams. Therefore, no review should lead you to a website that has a scarcity counter and think it’s genuine.They have paid actor testimonials as well. These are the regular guys sourced from popular fiverr market place. They’ve polished their language and acting skills to present this scam as the most authentic in the industry. Of course everything that comes out of their mouth is fake. These people are doing it for money.

Again, there is no credible evidence to suggest that people are earning any salary with Golden Paradigm scam. There is no real user who has earned with this Auto trader anyway. Therefore, you cannot be the first to test the waters, especially where real money is involved.Finally, this is a fake auto-trading Bitcoin software that uses an algorithm meant to wipe your entire account in minutes. As always, they will force you to sign up with one of their rogue brokers. When you make your first deposit, that’s when you will realize that you didn’t play your cards well.

Why 100% likely to lose money with the Golden Paradigm signals ?

Nathan Weiss claims that this Golden Paradigm software is something that its members endorsed. However, we have not come across a single member using this Bitcoin software. So it’s hard to verify anything beyond this.The claims of guaranteed salary every hour is of course not genuine. Finally, the actor claims that in order to get your guaranteed salary, you have to watch the short demo TheGoldenParadigm.co video and sign up before the counter hits zero.This fraud is thriving on the greed of many traders who will never hesitate to sign up just because they were promised a salary of over $900 per hour. Despite telling you that Golden Paradigm signals are free to use, the broker will still force you to make a minimum deposit of $250, something that will be flashed down the drain, leaving you $250 poorer!

Please take note of the testimonial section. This part of the website focuses on feeding greed and envy among impatient traders. These fake testimonials talk about how guys are doing big things with the money they are earning from Golden Paradigm signals. None of them is talking about how this Bitcoin system works.We do not like website’s that introduce themselves by mentioning expensive mansions, private jets, cars you name it. We have come to realize that all methods mentioning these things on the review section are fake.

This man called Gunther allegedly bought himself a Ferrari out of the money he earned from Golden Paradigm software.Another woman called Eleanor is flying in a private jet on her way to Bahamas. These are of course fake, and there are a number of those examples more or less the same.Nathan Weiss doesn’t want you to think. All he wants you to do is lust around the luxurious life that only few people can live. But we are advising the public to think again because all the claims are really crazy or insane.They claim all users will make $978.63 per hour without fail. But the question is, how did they get to such exact figure? Why didn’t they just say users could make a thousand dollars?

The answer is simple; marketers of Golden Paradigm platform were told that using exact figures convinced people to sign up, and that chances of success were very high if they used such figures.They know that these things will automatically turn off your logic thinking so you can go full throttle on emotional decision-making. But you will regret it as soon as you hand over your wallet.

They claim getting an opportunity to use The Golden Paradigm is a very rare occurrence, something that only happens when you’re invited to join. But we can tell you that they’ve already sent out millions of scam emails to various inboxes across the globe.Some reviews claim that the owner of this Bitcoin system talked about their Bitcoin software working on a 5 point pattern.Experienced traders are already familiar with a trading pattern that relies on 5 waves. It is known as emotive or impulsive pattern. However, the owner of this Golden Paradigm scam isn’t telling us what he means by 5 point pattern. It is simply not clear what he is talking about, yet he is quick to mention expensive cars and jets.You can not trust the crazy win rate of this Bitcoin software no matter what. In fact, now that you’ve read this review, start thinking logically instead of getting overwhelmed by the luxurious life of a fake Golden Paradigm user. We have sounded a fair warning in this review.