We expose in this review that the Automated Cash App Software is Scam by Jason Howe. His new Bitcoin trading system could generate anything from $1000 to $7000 weekly irrespective of your initial investment capital. It further claimed that all you need to generate that amount is an internet connection, because according to him, his Automated Cash App bot is free. We have seen many fake claims like this and found this to be unreliable. What made you believe that somebody can give you his app, which made him millions free?

Claims like this and information contained in the Automated Cash App website are enough to blacklist this fraudulent trading robot. All evidence confirms the fact that Automatedcashapp.com method is a scam. It appears that this app is not new because it has been used several times in the past. What Howe did was just to reinvent it. If you compare with similar products in the past, you would see that there are almost no differences between the two. The only differences between them are the colors and the logo. This is a sign that Automated Cash App program is a scam trading bot.

There is always a lie that is common to most of the Bitcoin systems reviewed here, and that is the assumption that the creators are giving you a free Bitcoin software. In reality, the Automated Cash App program is not free because before you can even access the app, you must make a deposit of $250. Unless you deposit the money, there is no way you can determine whether the bot is working or not. When you make that initial deposit and you begin, the next thing that will happen to you is that you are going to lose your entire investment. Automated Cash App system is a scam, so beware.

Why Automated Cash App Method is a Scam !! Real Hints 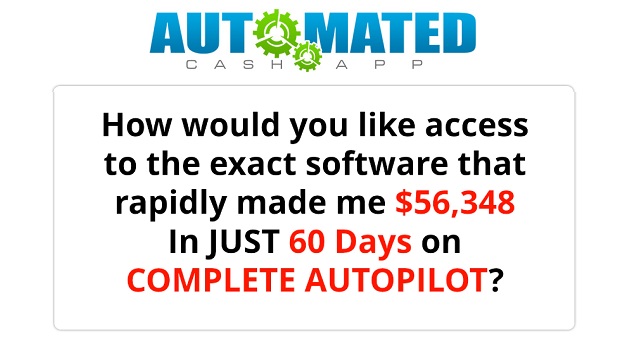 Jason said that Automated Cash Bitcoin software is going to generate thousands of dollars for you without any input from you. This strategy is common to most of the scam systems. It is obvious that claims like this are directed at new traders who do not know much about the trade and who want to make money with little or no efforts. The truth is that no robot can make you that type of money without monitoring it. There are different factors that determine the price movement and no Bitcoin software is in control of these forces.

We seriously doubt whether the founder and the chief executive officer of Automated Cash App are existing. One pattern that exists among fraudulent Bitcoin systems is the use of fake names. There is nothing to show that the man Jason actually exists. His claims that he was a successful trader before he decided to invent the Automatedcashapp.com could not be verified. We discovered that the man has no social media profile. There is no information anywhere linking him with the trading experiences, which he claimed that he possesses.

Compelling evidence that shows that Automated Cash App software is a scam is that it uses fake testimonials to convince people that it is legit. All the testimonials and feedback were reviewed and were discovered to have emanated from fiverr.com. Jason hired fake people to fake testimonials. You may begin to wonder why Jason has decided to fake his testimonials instead bringing authentic traders to verify his apps. He decided to run to fiverr.com because he can easily purchase fake evidences for a price as low as $5.

The Automated Cash App is Not a Winning Algorithm !!

After watching Automated Cash App video and reading the site content, there is nowhere it stated how they generate their signals. No trading algorithm anywhere and that can convince anybody that the app is indeed scientific and reliable. Claims by Jason that he was a successful investor who decided to invest his own time to trade BO does not replace the fact that his app is not based on any identifiable algorithm. This is sufficient to flag and blacklist the trading method.

If you look at the Automated Cash App website, you will understand that it is a big joke. The site was poorly designed. It could be said that he paid $5 for the website design. The site is not attractive and that shows that it never came from a serious minded trader. There is nothing on the website that can make anybody to believe its claims.There is no evidence that anybody has earned a dime using the Bitcoin system. It does not even provide anybody the opportunity to try it before using as some Bitcoin systems do. Instead of earning money with Automated Cash App software, you are going to lose your initial deposit. We can always tell when we see a fraudulent trading app. Search the app and you would be surprised at the number of paid positive reviews on the internet. The app was endorsed by those sites known to endorse fake trading apps. For the fact that notorious sites endorsed Automated Cash App system, it will always stand out as a scam proof.

The Automated Cash App system is one hundred percent scam. There is nothing good about it. Nobody has made money using this app, and nobody will make money with it in the future. It is a waste of money for anybody to think about investing on the app. There are profitable Bitcoin systems that can help you make money and not this scam called Automated Cash App method.Always check our scam Bitcoin signals page before you join any Bitcoin systems. Share your Feedback about this bogus App Below.