In this review we have exposed Greenwood Formula Bitcoin software ,which is a confirmed Scam. The Greenwood Formula Bitcoin System is being presented by an anonymous person, we have all reasons to proceed with caution. It would be wise taking our standpoint concerning this Bitcoin software because its true success rate is not known, and neither are the people promoting it any credible.

When you visit the Greenwood Formula website, you will realize that this Bitcoin software is being presented as the most profitable trading App you could use on the planet. And since Jake (the anonymous Greenwood Formula owner) is claiming that you will be compensated a whooping $10,000 if you fail to make $100,000 in 30 days, we can use this as evidence that he needs to catch your attention by sounding so confident.

No one will ever pay you the said $10,000. This is not a guarantee. But even if it was some sort of a guarantee, you wouldn’t want to trust a guy who is clearly remaining anonymous throughout his presentation. Greenwood Formula is a trap laid for newbie traders, and you can see that this is a statement designed by plan to boost confidence. 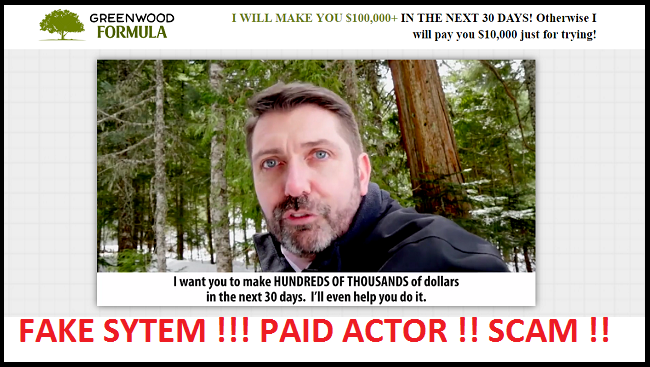 According to this anonymous figure who claims to be a multi-millionaire, Greenwood Formula Bitcoin system has never failed anyone who used it. This means that he has never paid out a $10,000 bill out of his pocket to compensate people who lost time and investment using this Bitcoin software. Again, this statement is designed to boost your confidence towards this malicious trading App.

Apparently, the Greenwood Formula Bitcoin system is an ordinary scam which you’re supposed to lay your hands on for free. With all the assurance, we can see why new traders are more likely to fall for it. Why are they giving it out for free anyway? Why is Jake promising $10k free money which he’s willing to distribute to anyone who fails with Greenwood Formula program? It is because this Bitcoin software doesn’t fulfill its purpose. It is a scam, which is why it is sounding too good to be true.

Fraudulent persons are all after announcing all their worth to attract the attention of the average trader. The so-called Jake claims to be a multi-millionaire. However, his multi-millionaire profile continues to remain incognito. Instead, all he says has been replaced by evidence that point his role as an actor hired to present Greenwood Formula signals for $5 only.

In fact, Jake has appeared in several other Bitcoin promotions on the internet. He only changes his character and name of the Bitcoin software he is promoting at any given time. For instance, he played the role of a CEO when promoting the Profit Maker Method scam. Today, he is still the head of a team who engineered the Greenwood Formula Bitcoin software. That sounds quite unrealistic, and we don’t see how we can ever put pieces of the puzzle together. Unless this man is a scammer, we don’t see how on earth he is real with all the false boasting and hyping.

Many traders wonder if this Bitcoin software is truly profitable as they claim it to be. You notice that each member has a verified rubber stamp to depict that they are indeed regular and profitable users of Greenwood Formula App.These guys are busy thanking fake Jake for his sure-fire Bitcoin system which has enabled them live a life they only dreamed of before. They are even showing account screenshots to go alongside their testimonials. These are supposed to be treated as proof that Greenwood Formula Bitcoin system works.

When you realize that all the Greenwood Formula reviews, testimonials and people who appear in this section are paid actors.We noticed one alleged user appearing on another scam called the Amissio Formula Bitcoin system. Here, he played the role of a computer programmer instead of a member. Can you see how these guys are fooling you to lose your money? Of course they are pushing it too far. If your not careful, you could lose a lot of money on this kind of thing. Thankfully, this is the reason we published a comprehensive Greenwood Formula review to shed some light on this scam signal service.

This review would have been rendered incomplete without mentioning how this platform looks like from the inside. Yes, it is a scam, but we still have a few ridiculous things to point out. First, we were told that this Greenwood Formula Bitcoin software would make us a whooping $100,000 in Bitcoin profits. This was supposed to be made in less than 30 days. Not only is that figure impossible to achieve in 30 days, but also the Bitcoin software itself doesn’t look very capable of yielding any profit in a day.

This is the kind of Bitcoin system used by scammers all over the internet. For instance, the Greenwoodformula.com website is the same Bitcoin software that was used in scams such as the Hedge Formula and the Money Glitch. These are well-known scams by the way. And seeing that they are using the same thing, it settles our doubt completely.

Again, this bogus trading app will force you to deposit a minimum of $250 with their selected brokers. This is supposed to act as seed money which you will use to multiple your profits in one night. Sounds magical, right?

Well, by doing so, you will be putting yourself in great risk of losing that money. There is nothing like free Greenwood Formula Bitcoin software. It is not free because you always stand a big chance of losing that money. So this automatically amounts to $250 worth of a useless piece of crap.

All scammers know nothing about Bitcoin, let alone the financial markets. Instead, they are abusing the opportunity to make money for their bellies. These are greedy individuals who want to capitalize on newbie traders who don’t have much knowledge on what they are getting into. So stay away from Greenwood Formula scam.