Go through our Important review ; The IMarkets Academy Bitcoin System which is another Scam App. Therefore, no matter how good and honest this website sounds like, it is not to be believed since every statement they make in that website is full of red flags. We are actually warning our readers in this IMarkets Academy review not to think of putting their money into I Markets Academy Bitcoin software, hoping they’ll make a fortune. In fact, ignoring this review would lead to suffering a financial misfortune especially for those who have a big appetite to invest more than the required minimum.

The entire presentation of the IMarkets Academy Bitcoin system is very short. Of course there’s the usual introduction video that tell lies about how good I Markets Academy signals are. Also, they’ve got a bunch of testimonials from fake users who claim that they made a fortune in just 8 weeks using this shoddy Bitcoin software. First, the short IMarkets Academy presentation is full of red flags which point it as a sure scam. We detect the first red flag when this website tells us that if we invest $250, you will turn that money into $1,583 in every 15 minutes. That is of course impossible and a big math error. What formula are they using to multiple $250 to give $1,583? Even the guys at Wall Street don’t make that much in 24 hours.

What is more, they claim that IMarkets Academy Bitcoin software is fast, risk-free, plus you don’t need any prior knowledge or experience in the bitcoin market to use it. So, in other words, when you use IMarkets Academy Bitcoin system, you are being promised free money as a guaranteed benefit. But this statement doesn’t make sense because trading the financial markets with success takes a good Bitcoin software or some knowledge to do it manually. If a product owner makes statements that are not realistic, then know that they are only looking to make money in a dishonest way.

Another big lie is that 96.3% of traders double their money in just a few hours. But this is a nice way of telling you that this IMarkets App has a success rate of 96.3%, which is impossible. 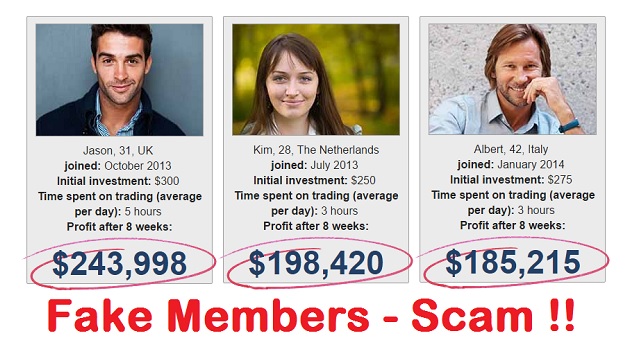 This guy introduces himself using one name and he goes on to say that since you’ve arrived on their website, you have already begun following the right path to financial freedom. He claims that he holds the key to financial freedom, and in the next few minutes, you will change your life completely, thanks to the tons of money you’ll be making with IMarkets Academy Bitcoin system. But do you think he’s getting honest with you? No, he isn’t because everything he says is out of reality. He clearly doesn’t want you to stop a second and think logically.

The IMarkets Academy Bitcoin software: A gold mine they are giving for free?

When we reviewed the statement of Richard giving away a gold mine for free, we laughed because a gold mine is not supposed to be let out. That is why it’s a gold mine in the first place — it’s supposed to remain discreet to benefit a few people, if any.

But now this ridiculous guy is giving access to a gold mine for free, yet he is charging $250 on the pretense that you will be investing that money with their broker to start making profits. The fact is, no one gives free money. The situation even gets worse when you go to the financial markets with very little knowledge. Unless you know what you’re doing, it’s like gambling with no certainty of the outcome. Therefore, if someone claims that he is giving away free Bitcoin software that is 100% safe and legit (with no hidden cost), he is clearly fooling you, or probably taking advantage of the fact that you still don’t know much about what happens in the bitcoin industry.

Just scroll down the Imarketsacademy.com page and you’ll be met by a few smiling faces claiming some impossible revenue gains made in a very short period of time.The first guy calls himself Jason from the UK, and he allegedly made $243,998 in 8 weeks of using this App. Kim from the Netherlands made $198,420 and finally the third guy, Albert from Italy made $185,215 as profit in just 8 weeks.

Now, let us think soberly here. Robert, the presenter says you can use IMarkets Academy Bitcoin system as a source of your second income. If the revenue gains above are true, there is no point in working for your boss and treating thousands of dollars as a second income. Which job in the world pays that much in 2 months? There isn’t any. The whole statement is not realistic based on the profit figures that this Bitcoin software is recording, and for this reason, you should dismiss everything here.

Well, let’s move on to the smiling faces you’re seeing on the IMarkets Academy website.Do you know that those photos were used without their owner’s permission? Those individuals probably don’t know that their photos are being used to commit crime.In fact, they were just lifted off a public database to help with the fictitious stories and profit figures. Take a look at the link below:

Inside the IMarkets Academy Bitcoin System

Some people go as far as signing up only to realize that this thing isn’t free as initially claimed. It is for this reason that they stop and search for the question of ”Is IMarkets Academy a scam?” to ascertain the truth.If you’re among these traders, then we want to warn you again to abort the entire process. Don’t even waste your time answering their emails or phone calls.

You see, they claim the Bitcoin software is free, but when you sign up, you realize that you still have to register with one or their unregulated brokers. This means sending them $250. If not, you have to pay at least $50 in fees to start using the so called free Bitcoin system.

Conclusion : The IMarkets Academy is Scam !!

All we’ve said in this review is a confirmation that IMarkets Academy Bitcoin software is a scam. These criminals are paid by brokers to refer new depositors to the trap. Once these brokers net your money, they don’t care much about you, and neither does the referrer do so. Therefore, just stay away from this Bitcoin system called IMarkets Academy signals because these are highly trained Cyber criminals in stealing.