From a starting sum as low as $250 this groundbreaking Quantum Code system should (note the use of the word) swiftly deliver a regular weekly income of approximately $50k per week. Before you rush to sign up for the Quantum Code program it may be worthwhile just performing a little due diligence first of all…

Of course, it should come as no surprise that after only a little digging it becomes pretty clear that the Quantum Code website is a scam. It is quite frankly so brazenly bold with its ludicrous claims that only the most desperate or naive opportunistic investor would ever look to sign up with this scheme. This expose will take a look at highlighting the major reasons why the Quantum Code system is only ever set up to make one man rich – and, surprise surprise, that happens to be Michael Crawford.

Why is The Quantum Code Bitcoin Software is Scam? Facts Uncovered !! 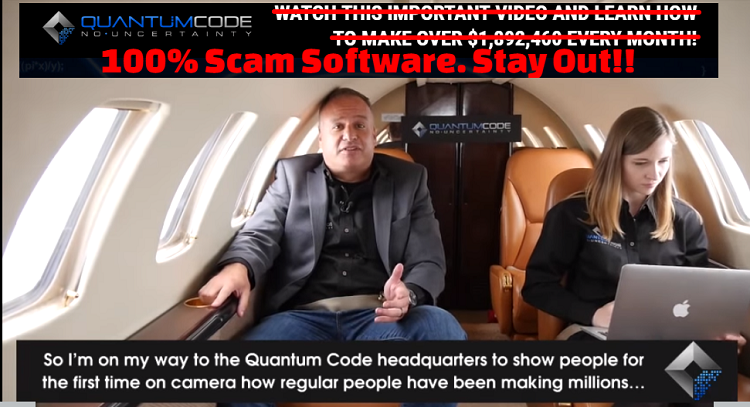 The claims made by these Quantum Code providers are of course going to attract their share of web traffic. To give him some credit Crawford has set up plenty of stooge reviews that give his miracle Bitcoin software glowing reviews. However, visitors may be slightly unimpressed to be immediately greeted by a kind of infomercial that is 99% promises and 1% explanation of how the Bitcoin trading system works. It’s cringe-worthy enough (sports cars, glitzy show homes, plus repeated reminders on the staggering returns on offer) that it might just be enough to tempt the foolhardy to sign up.

Of course to gain full access to Thequantumcode.net website you need to supply an email address in order to be bombarded with spam for the rest of eternity. Upon access, it’s pretty much a case of ‘show me the money with a very sparse amount of information on how the Quantum Code system is supposed to work. There’s also a worryingly low amount of small print – so it’s hardly looking like the most transparent operation out there.

The Profits Stated on The Quantum Code Website Are All Fake !!

Truth be told the Quantum Code Bitcoin software used to generate these promised staggering profits is one of the worst Bitcoin trading platforms which we reviewed recently. It’s a watered-down and dangerously over-simplified copy of the Bitcoin trading systems used by genuinely reputable stockbrokers. Now that might not sound too bad – hey the guy’s just trying to make a buck right? Wrong it’s incredibly foolhardy and a surefire way to burn through any investment (providing the deals are being made in the first place of course….).

How it works is that the user credits their Bitcoin platform with a certain deposit. Many people think that the Bitcoin system is from hereon in entirely computerized and fail-safe. This is utterly wrong, and with the Quantum Code program, the investor has no say whatsoever in what trades are conducted and under whose authority they are managed. All they have control over is how much they are willing to essentially gamble/throw away with each trade – the investor has no say over the number of transactions made per day or at what level of risk.

There’s No Money Trail Or Accountability

As impressive as Quantum Bitcoin trading may sound, the fact is that these Bitcoin systems are highly limited. Bitcoin trading is supposed to work by essentially emulating the market trends and trying to beat other investors to the best price. With a well-managed professional system complete with limits, loss fail-safes, and educated supervision they can sometimes turn a gradual profit. The Quantum Code Bitcoin software offers none of these prerequisites.

Investing funds into this scheme is one of blind faith. Your funds will vanish into the ether and most certainly never be recovered by any form of trading. For all the investor knows the trades are being completely falsified, the money simply being siphoned off and stashed away beyond any hope of retrieval. It’s common for many sites such as the Quantum Code scam to immediately transfer the funds they receive into BitCoin or other virtual, unregulated currencies from where they are impossible to recover. Take that as a fair warning.

Any More Doubts That The Quantum Code Is A Scam?

OK so even still the promise of false gold is still feeling tempting? There are a few other things worth reviewing about this setup that may be worth considering. Returning to their introductory Quantum Code video on the review website, there is next to no information on who the elusive Michael Crawford actually is. Reckon he’s really the guy in the video – I’m not so sure.

It’s just as likely that he doesn’t actually exist and the entire scheme is set up and managed from an unregulated scam-friendly country with the inclination to appeal to overtrusting western investors.

You can be sure that if Crawford really was earning $1 Million a week and had half a billion in his cashing accounts, he’d be at least a household name – but no. Not a trace…Again during the movie, the actor is swift to express that anyone of any means is free to get on board the Quantum Code Bitcoin software and make big money. Of course, this is PR sales nonsense – it’s $250 minimum to unlock the Bitcoin software, and even if 9/10 people are smart enough to bail out at this stage – they’ve still got your email address to sell on.

Conclusion: The Quantum Code Bitcoin Software is a Scam !!

In this objective Quantum Code review, we conclude this App is a scam of the highest order. Credit where it’s due – whoever is operating this Quantum Code App site knows their market and makes their sales pitch in such a way as to appeal to the lowest common denominator – greed.

The simple idea that Bitcoin trading systems this basic (if they actually even work/exist in the first place) should appeal to any sensible investor should be outlandish. The prospect of the returns being suggested alone is completely outlandish and mathematically impossible! For those still in doubt: The Quantum Code is a scam Bitcoin software!

Dan James Clarke is a Marketing professional with prior experience assisting businesses with brand promotion via the web and social media. He is the founder of Personal Branding MAG, a site focused on internet marketing and online branding. His work has appeared in a variety of reputable media outlets, including Entrepreneur, and Business Insider. He specializes in branding, Fintech, and internet marketing topics.