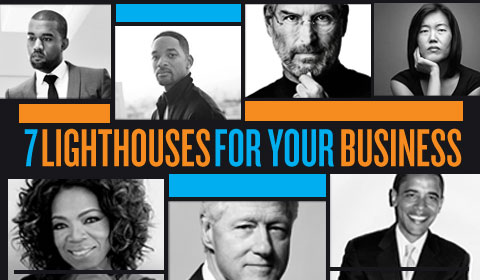 7 Lighthouses For Your Business

I have to admit, as an entrepreneur, some days are harder than others. On those hard days, I need more than my usual optimism to get me through. I need the strength of those who came before me and lit the way. I know it sounds a bit corny, but seriously, it’s helpful.

Everyday when I go to my office and turn on the computer, 7 faces stare back at me. These are my business “lighthouses.” They represent character traits I aspire to develop to make me an unstoppable force in business.

They influence me so much throughout the day, I’ve made them my desktop wallpaper so I can constantly be reminded to do more and reach farther.

Here Are Seven Lighthouses That Guide My Business:

Steve Jobs is my model of a successful CEO. Where others seek to make “acceptable” products for mass consumption, he stops at nothing short of amazing. He takes his personal passion for excellence and infects every aspect of his business with it– day in, day out.

“Be a yardstick of quality. Some people aren’t used to an environment where excellence is expected.”- Steve Jobs

2. Bill Clinton. Add An Ounce Of Swagger To Everything

Ok, this one was a toss up between Barack and Bill, Bill won just because I’ve seen his swag longer. There is just a way about Bill Clinton, that’s a bit hard to explain, it’s almost like he’s everything to everybody and himself at the same time– is there a word for that? Oh yeah, it’s swag. I’ve seen women talk about Bill Clinton, nerds, tough guys, black people, white people and they all seem to have the same look on their faces— awe.

The lesson I learn from reading about and watching Bill Clinton is once you’ve got the inside down, work on the outside. To be successful in business, you’re ultimately going to have to understand people, and who’s a better teacher than Bill Clinton?

‘If you live long enough, you’ll make mistakes. But if you learn from them, you’ll be a better person.” -Bill Clinton

3. Michelle Rhee. Speak Your Mind, And Back It Up With Action.

As education reform has become a major issue, I’ve been seeing more and more of Michelle Rhee, the former DC Schools Chancellor and now CEO of Students First. What sparked my interest in her was her willingness to say what she thought at all times even if it could possibly hurt her politically.

Rhee speaks her mind and calls people to task with absolutely no regard for retribution. In one interview, I watched her call out UFT president Randi Weingarten when no one else would.

“We are always going to put the best interests of kids above the rights, privileges and priorities of adults.” -Michelle Rhee

4. Kanye West. Be Fearless. Be Vulnerable.

When I think about people from my generation who are creatively fearless, the one person who comes to mind is Kanye West. From saying “George Bush doesn’t care about black people”, to shooting a hip hop video with a Prague ballet company, Kanye definitely leads with his heart and takes lots of risks along the way.

Kanye reminds me everyday that there is strength and fearlessness in being vulnerable and raw.

“It’s not about popular opinion, it’s when you look in your heart and know what’s right and what’s wrong… if you’re a real artist, HAVE NO FEAR.” -Kanye West

5. Oprah. Be Humble, Let Your Accomplishments Speak For Themselves.

I know, I know, Oprah is pretty much everyone’s role model. But with every single accomplishment that she’s achieved, have you ever heard her brag about it a little? Oprah continues to teach me a simple but powerful lesson, let my work and my accomplishments speak for themselves.

“My philosophy is that not only are you responsible for your life, but doing the best at this moment puts you in the best place for the next moment.” -Oprah Winfrey

“The skinny kid with the funny name”, that’s how our first black president characterized himself. Would you have ever believed a guy named Barack Obama would be our president? I have to admit, even I was skeptical at first. He wasn’t.

What I draw from President Obama is to never let people put you in a box. Have giant goals and make them happen no matter if it’s never been done before.

7. Will Smith. “Out” Everything

Watching various interviews of Will Smith inspires me more than watching his movies (though I love most of those as well-sorry Seven Pounds ). The trait I draw from Will Smith is his ability to outwork, out hustle, and out everything everyone else. The only way to become the best is to “push” yourself, Will Smith is a dynamic testament to that.

“I will not be outworked. Period. If we get on the treadmill together– there are two things: you’re getting off first or I’m gonna die. It’s really that simple. You are not gonna outwork me” -Will Smith

Every entrepreneur needs a lighthouse to navigate them through troubling times. Who are the inspiring individuals that motivate you and guide your business every day?