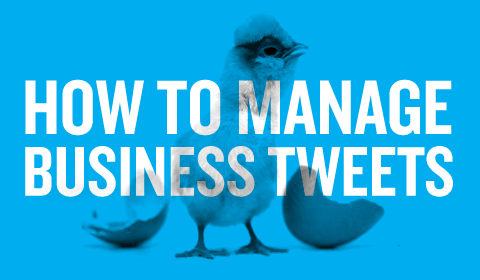 How To Manage Business Tweets

Unanimously, agencies have weighed in with torches and pitchforks for the AE that made the unfortunate mistake of tweeting the message that lost his agency the Chrysler social media account.

While I do not condone, or excuse, such thoughtless public commenting, the blame should not land squarely on a renegade AE or spokesperson. The culture starts with the agency leads. The trust ensured to agencies with access to corporate accounts, or to spokespersons who represent a brand, should not be taken lightly. Poor choices of the right team member(s), or affiliate talent, are to blame.

To avoid the pain we’ve recently observed in the social media marketing space, adhere to the following rules.

In the case of corporate account maintenance, using Tweetdeck or Splitweet to manage multiple accounts is not always a good idea. Especially for mobile, on-the-run solutions, where the slip of a finger can post one message across all accounts.

Also, ensuring 24/7 client support by giving access to multiple team members is effective, however, every decision to add a team member with full access must be made with great care.

For brands (and even comedians) a social media messaging protocol should be in place. And no, I’m not kidding, Gilbert. For agencies, their Marketing and Communications teams usually coordinate the approval process. Before sending out any message, have the explicit consent to do so, in real time.

Time and time again we see that deleting the offending tweet does not save the day. For public figures, have a person to run messages by. Maybe your management team, to make sure you will not be knowingly, or unknowingly, dissing a corporate partner or an entire city on your next tour stop.

NBA player Dwight Howard’s ex found this out too late. Her seemingly innocent tweets about her son violated a confidentiality ruling and could potentially lose her millions promised in support.

For the love of God, you do not have to dig deep to ascertain the “moral compass” of a team member or spokesperson. Whether or not someone calls other human beings “douche bags,” or uses profanity in public spaces, can be recognized in less than 60 seconds simply by checking their social media pages.

Before launching any corporate campaign, discuss a protocol for damage control. Any AE can make a mistake, even a huge mistake. Sometimes it’s not the mistake, it’s the attempt to cover it up, or pretend the mistake is not a huge deal, that sends the client into a tizzy.

The agency should over compensate by being proactive with a solution at hand: an apology to the Facebook community may or may not have been in the works.

If instead everyone passed the buck until they found out who did it — or worse, the client discovered the retweets before the agency pointed it out – that is a relationship ender. An hour of cover-up and hand wringing isn’t a very good use of time.

It’s best to have a plan in place to apologize, and then fix the issue at hand, for all parties concerned. And yes, the “fixing” part means taking the guy with the bad attitude completely off the “feel-good, Americana focused” account. Although this AE actually got fired, he’s now wide open for the Charlie Sheen intern gig.

Seriously. What struck us about the Chrysler post that no one else has mentioned yet is this clearly seems like a case of road rage. Are we to believe that he pulled over to tweet this, or tweeted this over a calming cup of tea at Starbucks? He surely can’t say Oprah didn’t try to warn him.

Tynicka Battle is the CEO/co-founder of ThinkTank Digital and has lead development of media strategy and interactive campaigns for the 2010 US Census, Pepsi We Inspire, Motorola, The Bombay Company, the Black Eyed Peas, Miranda Cosgrove and countless theatrical releases for New Line Cinema, Miramax Films and Lionsgate Entertainment.