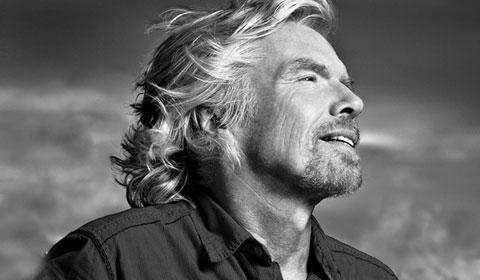 Virgin. In the English language, this word holds quite a few interesting meanings. But to one Sir Richard Charles Nicholas Branson, the word represents a steady rise to achieving the title of “tycoon.” It certainly can’t be easy becoming the 261st richest person in the world (according to a 2009 Forbes magazine report.) But a perfunctory glance over Britain native Richard Branson’s resumé just might cement the idea into your brain.

Indeed, Richard Branson happens to be the man behind the Virgin Empire. Said empire was launched with Virgin Records (later to become Virgin Megastores), a discount record store that Branson opened in 1972—well before many of today’s pop kings and queens were even born.

His penchant for business blossomed; and soon the Virgin name began popping up on all sorts of ventures. Truly, the scruffy, yet distinguished English gentleman behind Virgin Records was clearly on a roll.

Coming from a noble family background of judges and barristers, it might not be surprising that one individual could create such a lucrative network of goods and services. Ironically, it wasn’t necessarily Branson’s academic prowess that led him to economic royalty.

Indeed, it was probably his “off-the-beaten-path” mode of thinking—and perhaps a streak of rebellion—that found him on the right side of success.

The organizations stamped with the Virgin label are immediately respected—not simply because of the trendy persona, but because of Branson’s solid track record as a man unafraid to take risks. Sure, the Virgin brand is one most associated with music, technology, and all things hip and cool.

That Branson has had the opportunity to extend that brand to many different facets of business (like international transportation) speaks volumes.

But Sir Richard Branson isn’t all about raking in the cash. He’s found innumerable ways to give back, constantly searching for ways to make the world around him a more efficient and fruitful place for human beings to live. (You know you’ve really made it when you’re rubbing elbows with the likes of Nelson Mandela.)

In short, Branson’s billion-dollar brand can hardly be considered a “virgin” anymore.