Checkout my in-depth Bitcoin Secret Loophole Review. Are you considering using Bitcoin Secret Loophole? Well, I guess it’s time to reconsider your decision. The website has nothing to offer its users. It’s a shady application you should avoid at all cost.I have discovered that you can’t make money with the software. Before I arrived at this conclusion, I decided to try the application out. What I discovered will shock you because it is a sham.

The creators of the Bitcoin Secret Loophole Review Platform claim that the software incorporates advanced technology in its trading. They assert that the automated platform provides traders with several trading indicators. The software then sells signals to other vendors who customize the indicators to their needs.

I can tell you for free, don’t invest your money in the fund. You’ll lose all your money because the automated trading app is not an intelligent robot. Incorporating several indicators in the pre-programmed app don’t make the robot superb trading software. 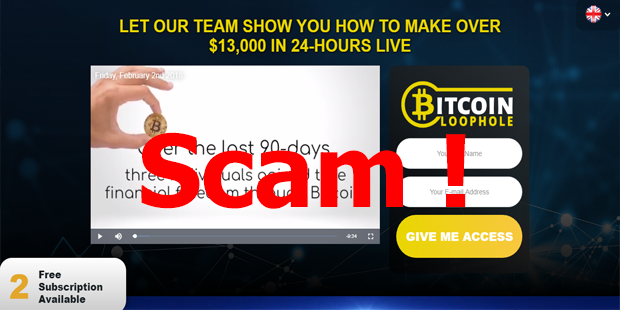 From my assessment, this isn’t the right way to add credibility. It’s unethical and deceptive! I’m confident that the software will give you wrong signals because it’s not an efficient trading application. So who owns this sham website?

According to my research, the inventor and driving force behind the website is Steve McKay. Who the hell is Steve McKay? First, let me point out from the beginning that the creators and operators of the system are anonymous.

Most scamming websites use fake characters to hide their criminal activities. Bitcoin Secret Loophole System is one of those sites. The conmen use such scrupulous methods to avoid responsibilities associated with their crooked online activities. So how will you trust Steve McKay with your money while it’s clear he is a fictitious character?

Steve McKay is an impostor and associated with several cryptocurrencies trading scams. The same fraudster is also behind Bitcoin Secret Loophole Scam. McKay is a criminal who should be rotting behind bars for his illegal activities. Steve McKay website promises its users $13000 a day.

The money is exorbitant for a day return. How do you believe this rogue individual? I can’t and advise you to do the same. I have done a search online to find out who Steven McKay really is, and shockingly, I didn’t find his credentials or background info.

For a famous person who gives thousands of dollars in profit daily to miss online is strange. The fact that I couldn’t get his credentials and background information online means McKay is a phony name. I can authoritatively say Steve McKay is not the real name of the platform creator.

Why would a site claim authenticity by hiding its creator’s name? All these actions are fishy and point towards one fact; Bitcoin Secret Loophole Review software is a scam! You shouldn’t believe the program. The software misleads its users with an intention of scamming them.

I assert that everything about the website is false. Please don’t make rushed decisions to invest in the fund. Should you make that mistake, then you’ll lose all your money as soon as you invest it. My intention is to avoid that from happening. 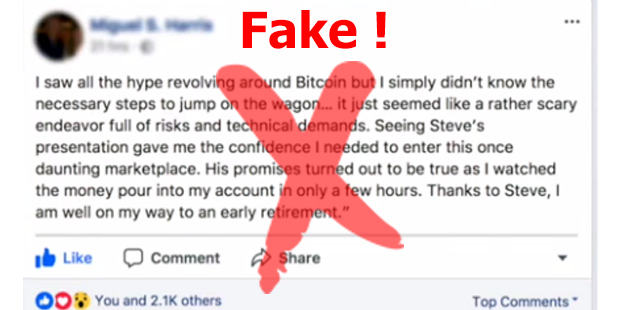 Let me proceed and explain further about the fishy deals conducted by Bitcoin Secret Loophole. The website has a number of promotional videos showing allegedly people have made good earnings with the app. However, these people look like fake individuals.

These scammers must have thought we are fools or it’s just a high level of ignorance on their part. Most likely the characters appearing in the videos are hired, actors. The conmen must have stolen the photos from other websites or bought the pictures from stock images.

The level of ignorance displayed by the website clearly shows that the site has nothing to with binary trading. I have gotten these crooks pants down and they have nowhere to hide. These criminals employ old scamming tricks to lure unsuspecting users into signing up for the program.

These tricks are no longer effective in this modern age. I have examined the portraits and realized that these were stock photos. Such gimmicks expose Bitcoin Secret Loophole Review App as a lame and lazy system. It also reveals that Bitcoin Secret Loophole platform is a bogus website run by fraudsters out to steal your investment. The site has nothing to do with cryptocurrency trading. 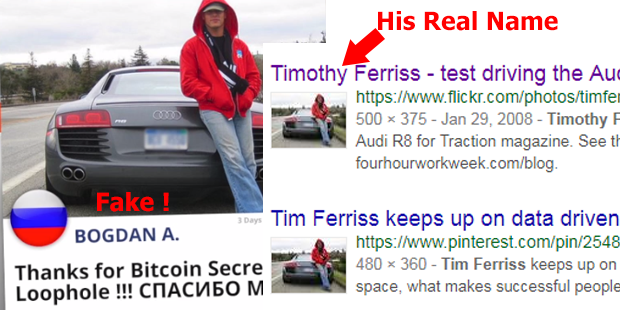 I took a closer look at the app and discovered that it has similarity to Bitcoin Loophole. Quite a number of the site users have complained about losing massive money via the application. What these investors don’t know is that the scammers have recycled the site several times.

I have nothing personal about the Bitcoin Secret Loophole review website. I’m objective and realistic as possible in order to unearth the truth. For your information, the investment platform has nothing to offer its clients. I don’t know how the website intends to deal with the numerous complaints from their clients who have lost their massive investments.

They have lured them into the site and scammed them. Full stop! It’s not easy to clean a damaged reputation. It takes time and resources to do so especially if it is a filthy scam as Bitcoin Secret Loophole. However, from where I sit, I’m certain they don’t care. These people have accomplished their objectives.

I believe this is solid evidence that the automated website is a ploy to rip you off your hard earned income. There is nothing to celebrate about this trading algorithm. You better look for other trading platforms that wasting your time with this software.

How do you Join Bitcoin Secret Loophole?

The owners of the Bitcoin Secret Loophole website indicate that it’s easy to join the platform. I noticed signing up to the site is a three-step stage. 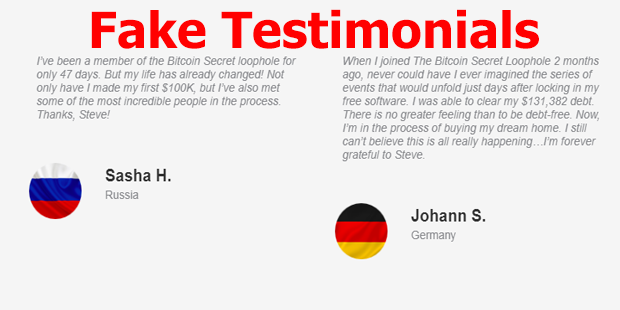 Absolutely, it is the worst scam in the cryptocurrency market. From this Bitcoin Secret Loophole review, I have demonstrated why this is so. You won’t get any meaningful returns with the software; on the contrary, you’ll end up losing all your hard earned money.

The Steve McKay Bitcoin Secret Loophole trading software is sham aimed at exploiting innocent and unsuspecting traders. It is a cartel run by rogue agents and the platform. The two groups scam their clients and share the rip off among them. I do advise traders to keep off this trading software. If need be, traders should look for other reliable and trustworthy trading software.

The platform is not 100% safe as Steve McKay website wants us to believe. I’m not a security expert neither am I IT specialist. However, even a system with good security features has some pitfalls. Therefore, these scammers should not cheat us. And from my assessment, all the scamming factors that exist on the site clearly show that it’s not a safe website.

I have seen such sites come and go after achieving their fraudulent objectives. I’m soon seeing the application disappearing into the thin air soon. You won’t trace it soon and by then, it would have scammed another of traders.